Today, I'd like to introduce someone from a place most people haven't been.  I'd sure love to visit the Yukon.  Our guest, Rachel, has a quote under the title of her blog by Arthur Ashe,


"Start where you are. Use what you have. Do what you can."

I've read her blog, going back a year or so, and she sure seems to live her life according to these words.  Perhaps it's necessary to do that when you live where she does.  In any case, they're good words to live by.  Her "awesome" life sure appeals to me. 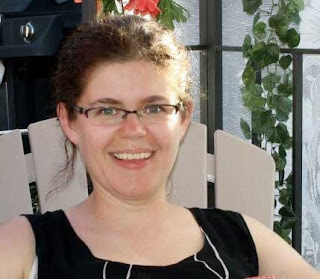 My name is Rachel Rodnunsky.  My blog is Tintina Fibres and is at TintinaFibres.com.  I named it that because, where I live, Faro, Yukon Territory is in the Tintina Trench, a land formation up here.

Faro is a small town of 400 people just below the arctic circle.  To do any shopping, I have to drive to Whitehorse which is 350 km so I often stay overnight when I go shopping especially in the winter.  That is also where the nearest hospital, drug store, dentist, mechanic, and any other amenity really is.  We just have a nursing station here and a small general store.

I grew up in Alberta, lived in Europe for a few years, and settled here in the Yukon 7 years ago.  I am a spinner, a crocheter, and a natural dyer.  I learned how to crochet in 1982 or so, when I was young.  I learned how to spin in 2008 just before I gave birth to my 3rd child.  I have been natural dyeing since 2010.  I really wanted to learn how to spin while I was pregnant with my second child and got a wheel but couldn't find anyone to teach me so I put the wheel away until I was pregnant with my 3rd child.  I was determined I was going to learn at that point, as I was back in Canada, but my marriage broke down during the pregnancy.  I had to go to Alberta to have the baby as I needed child care while I was in the hospital and where I live up here doesn't even have a doctor.

I asked on Ravelry if anyone knew of a spinning instructor in Alberta and was given the name of a woman.  I got my spinning lesson while I was 38 weeks pregnant.  It was spindle spinning as I wasn't able to bring my wheel.  I continued to spindle spin only for the first year of my son's life as it was quiet and he didn't mind watching the spindle.  I then started wheel-spinning but I still have spindle spinning projects to this day and have over 50 spindles.  I have 2 flyer wheels, one of which is antique Canadian Production Wheel, and I also have a book charkha (an Indian portable spinning wheel and you can see it being used here by a grand nephew of Mahatma Ghandi).

I decided like many people to start selling items I have made.  I  sell online but also tried my first craft fair last fall and did really well.  I also really enjoyed meeting people and explaining what I do to people and will continue to do craft fairs.  I teach spindle spinning in the local school and do workshops and demos through the local arts society every summer.

As far as items I sell, my biggest sellers are my hats. I have decided to focus on hats for the future as far as items I make and am starting to collect hat blocks in different sizes.

My biggest dream for the future is to continue doing this as my job.  I collect wild plants for medicinal use and for dyeing. (for example, I make my own lip balm and hand balm)  I work primarily with animal fibres and try to buy from people in the Yukon.

Come visit my blog anytime and see what I'm up to.

Posted by monika@mysweetprairie.ca at 10:19 AM No comments: